The Oregonian: Youth orchestra will present piece composed by one of its own

By Brett Campbell | For The Oregonian (original here)

When most people see their first ballet, they’re transfixed by the action onstage. But when 3-year-old Katie Palka attended her first “Nutcracker,” she was impressed by the orchestra. “I saw the violins at intermission and said, ‘Wow, that’s really cool,’ ” she remembers. “‘I want to do that!’ ”

Palka, now 17, of Beaverton, did become a violinist. She's performing in Metropolitan Youth Symphony's "Arabian Nights" concert on Sunday, March 4. She also became a composer: One of the pieces the symphony will perform is one she wrote.

After her orchestra pit epiphany, her mother, Annette Swartz, enrolled her in Suzuki violin classes. It didn’t take long for her to start making up her own tunes. After studying beavers in school, 5-year-old Katie composed “O Little Beaver.”

By the time she reached eighth grade, Palka's violin teacher realized she needed formal instruction in composition and sent her to Kenji Bunch, one of Oregon's — and America's — finest composers. He immediately noticed a couple of distinctive qualities.

“One, she’s so inquisitive. She showed up with a list of questions,” he recalled.

“Second, she’s so creative in an unapologetic way. It’s hard sometimes for students around that age to put their creativity out there in a way that makes them vulnerable. She has never been at all hesitant about that. She has this elaborate creative vision for each project she’s approached.” 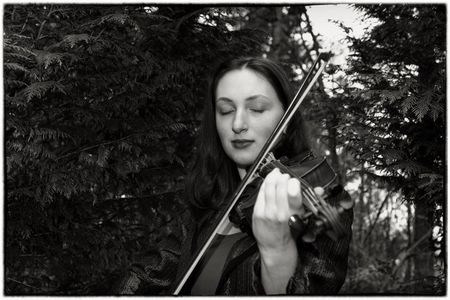 That year, Palka was playing violin in the MYSfits, the youth symphony's chamber orchestra, as it was rehearsing a composition written not by a bewigged 18th-century man but by a living woman. The conductor arranged for California's Gabriela Lena Frank to talk to the students by Skype.

Meanwhile Bunch, artistic director of the Portland new music ensemble Fear No Music, turned Palka on to its Young Composers Project, which gives promising teens the opportunity to work with professional new-music specialists for a year. Palka has completed one piece of chamber music each of her three years in the program.

“It was really creatively stimulating because you’re still developing your ability to predict what something you’re envisioning in your head and you write down on paper will actually sound like,” Palka said. Katie Palka, a violinist with the Metropolitan Youth Symphony, and composer Ryan Francis at a composition master class given by the Portland new music ensemble Fear No Music last spring. (Annette Swartz)

Through the Young Composers Project, Palka took a master class with Portland composer Ryan Francis. Last fall, she began studying with him individually.

“I’ve never had a student come into lessons ready to go with a page full of 15 very specific questions about what she wants to do in the piece,” Francis says. “She comes in with copious notes, then spends the lesson taking more notes.”

In 2016, Palka was chosen for the Eugene Symphony's Ode to the Future project — she worked with four other young composers to write a piece the orchestra premiered that year.

Palka got another rare chance to write for a full orchestra when Metropolitan Youth Symphony commissioned her to write an environmentally themed work for its March 4 concert.

“I’ve always been really interested in environmental issues,” she says. The resulting work, “The Breathing Earth,” focuses on “our interconnectedness to the environment as our home, not as a backdrop.” 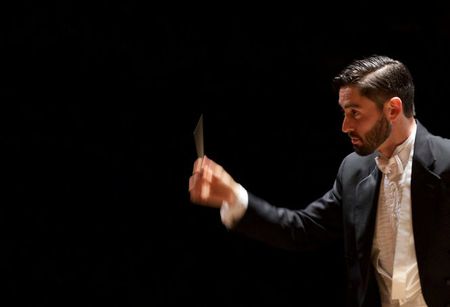 Metropolitan Youth Symphony’s music director, Raul Gomez, said, “There’s an almost cosmic feel to her piece in the way it treats time, while at the same time the music often has the heartbeat of the Earth.” Gomez said Palka’s work pairs well with Nikolai Rimsky-Korsakov’s “Scheherazade,” also on the program — “they’re both almost cinematic music.”

Palka's promise is being recognized beyond Portland. She was selected as one of five fellows for the 2017-2018 Luna Composition Lab, an all-female musical mentorship program at New York's Kaufman Music Center. Palka, who is homeschooled, gets to study with top women composers and have her music performed in New York.

“I’m looking forward to working with composers who’ve faced the same challenges of not having a lot of role models, your work being taken less seriously and not having peers who are young women,” Palka said.

Her selection attests to her progress. “It’s been really amazing to see her grow from this kid with a lot of interesting ideas into a sophisticated composer who knows what she’s doing and is literate in contemporary music,” Bunch said.